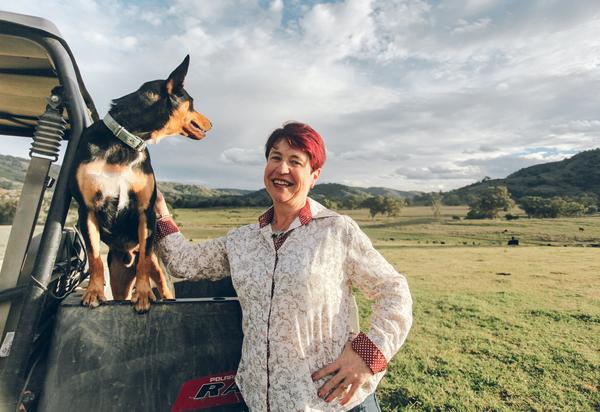 (as told to Paula Heelan for Graziher magazine)

I still miss home terribly, but I see our move from Clermont in Central Queensland to the North West Slopes and Plains district in NSW as a new adventure, and we are determined to make it work.  I knew we were in for a phenomenal change and despite a great deal of trepidation, we were excited.

I grew up on cattle properties in Central Queensland with my sister and two brothers. With both our parents’ families on stations in the Clermont district, we were surrounded by a lot of family.  I’m a trained nurse, but ended up working for a stock and station agency in Clermont. I met Bruce when he came to work for an opposition firm in town. After we married, we moved to Alpha for six months and then to Winton in Western Queensland, where we stayed for two years. After that we had two years in Barcaldine, where Bruce had his first position as manager of a stock and station agency.

I loved living in Winton and Barcaldine. In Winton I was nursing, so found it easy to mix into the community. Our first child, Carl, was born while we were living in Barcaldine and our next two, Brady and Hannah, were born in Clermont. I had all our children in Mackay, because having them in a regional centre was considered the safer option. In Barcaldine we were a young couple with a small child, and the community was just so welcoming. We had a beautiful time there.

[Read more of our “A Sense Of Belonging” stories in our Winter edition. More here]

We moved back to Clermont, where Bruce managed another agency. I was elated to return to my family. I think fate plays a hand sometimes. Soon after we were back, Mum developed ovarian cancer, which she battled for seven years.

Shortly after she died, my sister, Sally, was diagnosed with an incurable heart and lung disease, and she passed away at just 35. It was a huge blow to lose them both. We were all so close.

Eventually, Bruce and I decided to start our own stock and station agency and real estate. We also opened another office in Moura, four hours’ south of Clermont, and we ran Clermont Agencies for over ten years, before opening a merchandise store for another ten years. We started in three dongas, before constructing a large building for merchandise

Bruce and I are both from rural backgrounds, so when our business became very demanding, we decided we’d like to look for some country to run cattle. We bought an 8,000 acre cattle and sheep property, Belfield, 100 km north of Tamworth, New South Wales, in the Upper Horton district and sold up in Clermont.

With many trips back and forth from Clermont with truckloads of gear, the move was huge. It was a while before the locals realised we were here permanently. Belfield has four homesteads – one is over 100 years old and almost beyond repair.  We had to dive in to a lot of painting, renovating, fencing and yard building, and getting our cattle operation up and running.  But it’s great cattle country and with rolling hills and waterfalls, it’s very picturesque.

At first I found it difficult to meet people and to gain a sense of belonging, I guess because we were so busy and coming and going a lot. In our Clermont business, I was incredibly busy, and it was the kind of work that called for a lot of community involvement. When we left, that all changed. I found it quite lonely at first.  My poor hairdresser in Tamworth suffered a few ear bashings about how hard I’ve found it to meet people of a similar age and with similar interests.

Sometimes I took myself off to town, just to sit in a café and have people around me. But, I love the bush and really enjoy riding my horse and helping Bruce outside with yard and cattle work, particularly choosing our bulls.

In our first three years we had really good seasons. But then we had a few terrible years, with little or no rain. What grass we didn’t lose to drought, we lost to a grasshopper plague. That forced our decision to take our cattle (more than 600) on the stock route. We needed to hold on to our breeding stock until the drought broke and the market picked up. So, we went droving for six very difficult months.

It was winter and very cold – and without home conveniences, it was tough going. Some people didn’t welcome us along the way, because they thought we were taking their grass. But we also made some lifelong friends during that time. Two weeks in, I had a horse fall and broke my neck. Bruce had ridden off to look for some cattle, so I was on my own.  Knowing I’d done some damage, I crawled to the side of the road and lying flat on the ground, held my hat up to flag a passing car. I remember being lifted into the ambulance and worrying about Bruce.  The thought of letting him down was awful. It had been so tough up to that point, and now I was leaving him to fend for the cattle on his own. We didn’t have nearby family or friends we could call on, but we did get a little help, and after three weeks in hospital and a week at home, I was able to join Bruce on the stock route again.

Through our local town, Barraba, we have come to know quite a few of the local people. Without small children and the school network, you have to make a bigger effort to get to know people. I did a little volunteering at the local primary school, and that was a good way to get to know people. But then Dad was diagnosed with cancer, and I had to leave so I could run him in to Tamworth regularly for treatment. I’m now working one day a week in a great little café in town – which I’m loving and again, meeting more people.

It has been an education to learn about the different weeds and pests in this area and how to handle them. I have attended some land care meetings, which has also been a nice way to meet people.  And as I can sew quite well, I joined patchwork lessons, and we have lot of family and friends visit us. I’m really proud of the three young adults our kids have become and just love it when they visit.

When I get my garden back to what it was before we went on the stock route, I’d like to host a luncheon for the Beyond Blue organisation. I feel all of us need support at some time. I know both Bruce and I have had our moments, and often just a phone call has made all the difference. But things are going well now and after a difficult time, we are starting to feel a sense of place and finding time to enjoy our new environment.  I’m at last appreciating where I am and looking to the future and what we can build here. Belfield is green again; the grass has grown and the cattle herd is thriving.

[Read more of our “A Sense Of Belonging Stories” in our Winter edition. More here]